Top 10 Myths and Facts About Radon

Myth 1: Radon isn’t dangerous
FACT: In addition to the EPA, the Center for Disease Control, American Lung Association, and American Medical Association all agree that radon has a harmful effect on human health. Although some scientists dispute the precise number of deaths due to radon, all major health organizations agree with estimates that radon causes thousands of preventable lung cancer deaths every year. This is especially true among smokers since the risk to smokers is much greater than to non-smokers.

Myth 2: Radon tests are expensive and take a long time
FACT: A simple radon test is relatively inexpensive for something that could save a life. You can hire a qualified radon testing company to do a 48-hour test. Once the radon test is underway you only need leave the test undisturbed and wait.

Myth 4: Radon is only in the basement
FACT: Its concentration is usually the highest in basements, simply because it emanates out of the soil through the basement. However, as your attic ventilation sucks the air out of your living area, that air needs to be refilled and basement air gets pulled into other living areas and can contaminate the whole house. The HVAC system also circulates the air when it runs. Therefore, there is no way to avoid pulling the basement air upstairs.

Myth 5: Walkout basements don’t have Radon
All homes are prone to radon. It doesn’t matter if your home is on a slab, a crawlspace, has a basement or a walkout basement. A basement’s walkout level could help ventilate the basement. However, even if you consistently use the basement door to the outside, the amount of ventilation would be less than desired especially during winter when it probably isn’t being used much.

Myth 7: Having lived in my house for many years it wouldn’t matter if I took action against radon now
FACT: As the National Cancer Institute notes, “Long-term exposure to radon can lead to lung cancer.” It is long term exposure that matters, so it’s never really too late to check your home for radon. You will reduce your risk of lung cancer when you reduce radon levels, even if you've lived with a radon problem for a long time.

Myth 8: Selling a home that has a history of radon is difficult
FACT: Homebuyers obviously want a seller to fix an unaddressed radon problem, but if measures have been taken to fix radon levels this can actually increase home value. The added protection is often a good selling point.

Myth 9: A neighbor's test result is a good indication of whether your home has a problem
FACT: Unfortunately, it’s not true. Radon levels can vary greatly from home to home. The only way to know if a home has a radon problem is to test it.

St. Louis Radon welcomes the opportunity to speak at office meetings if your team would like to learn more about radon. Don’t take radon lightly as it is the second leading cause of lung cancer and it is elevated in more than 1 in 5 homes in the metro area. We can be reached at 636-200-2875. 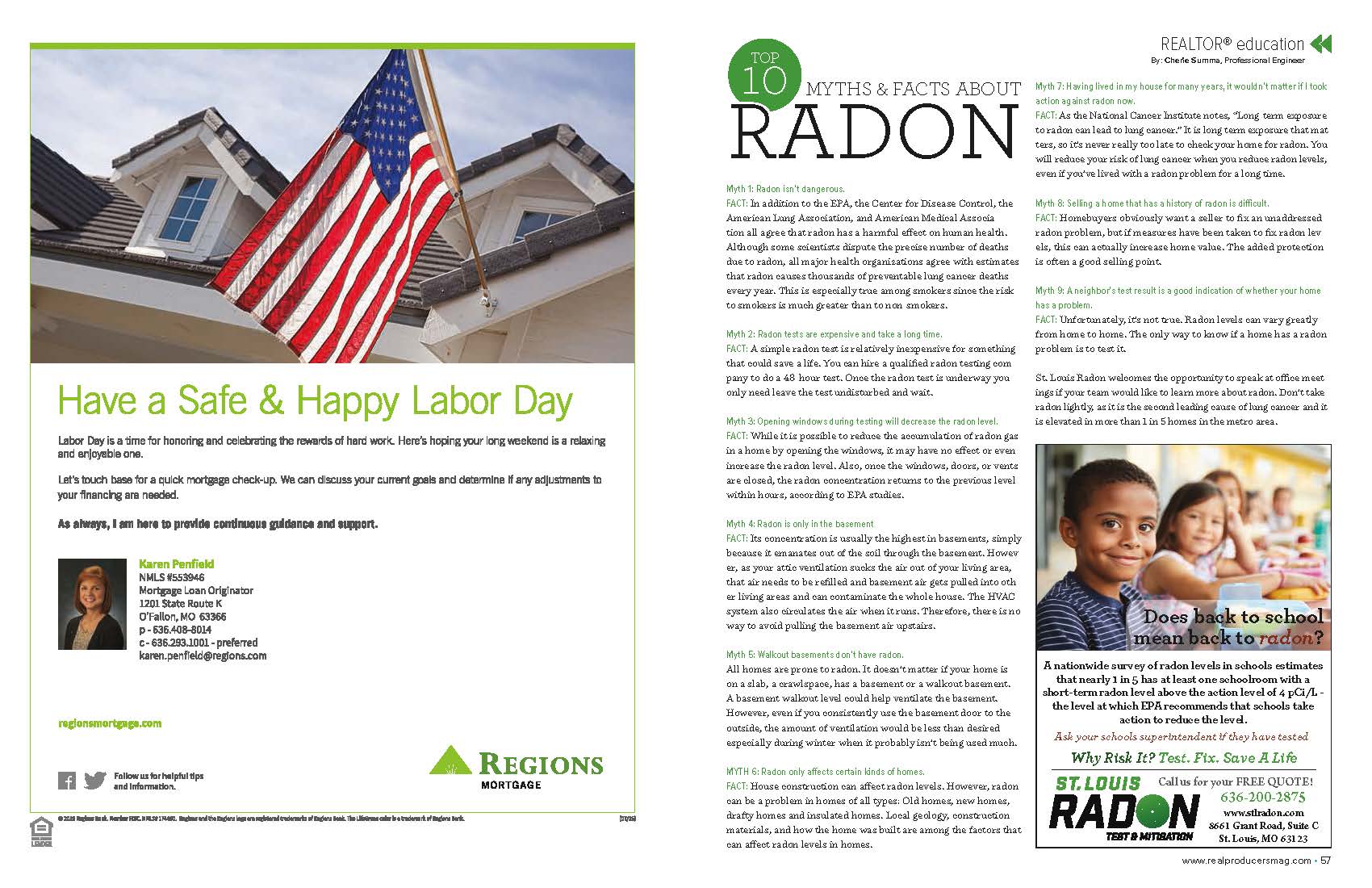