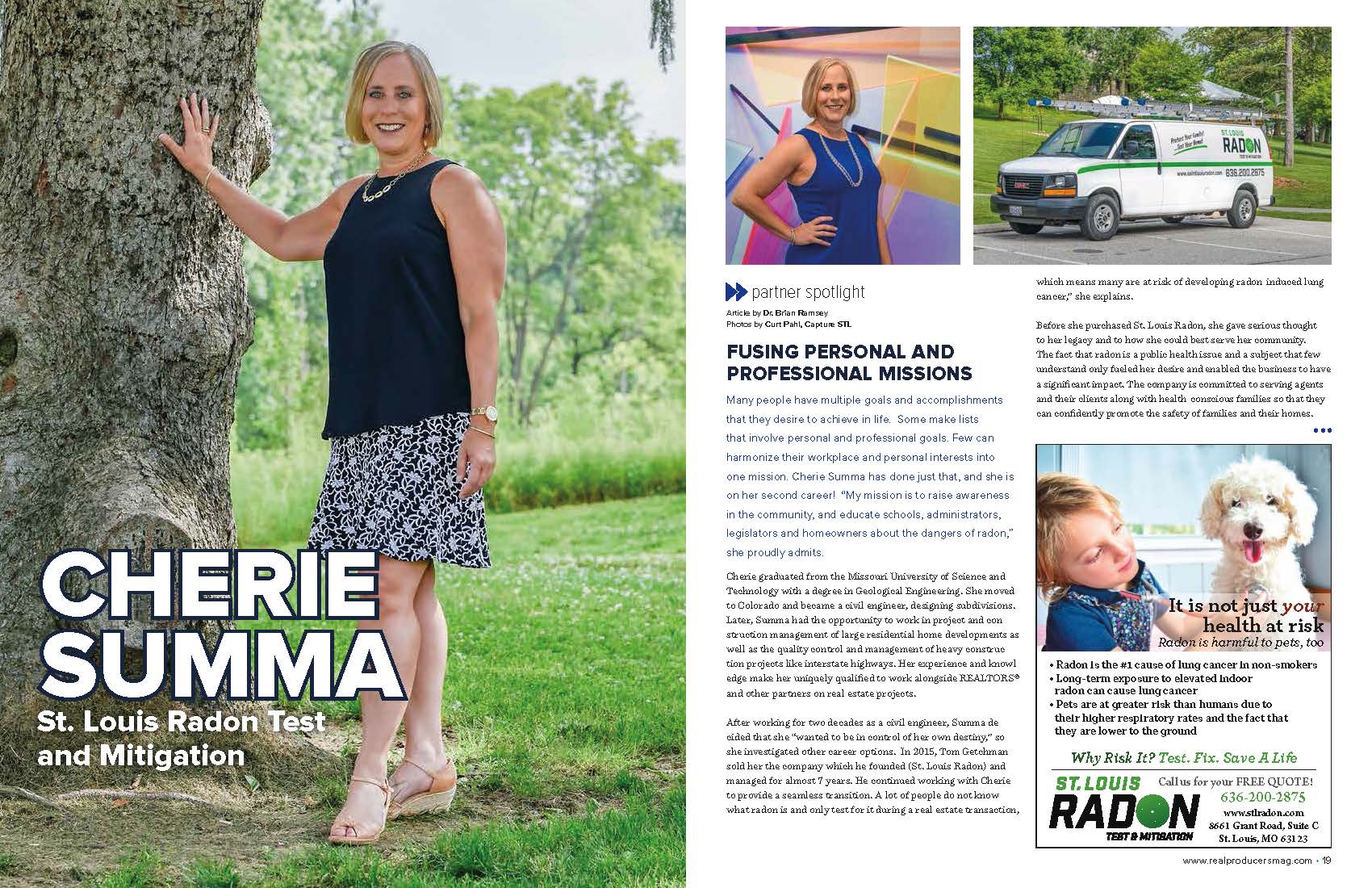 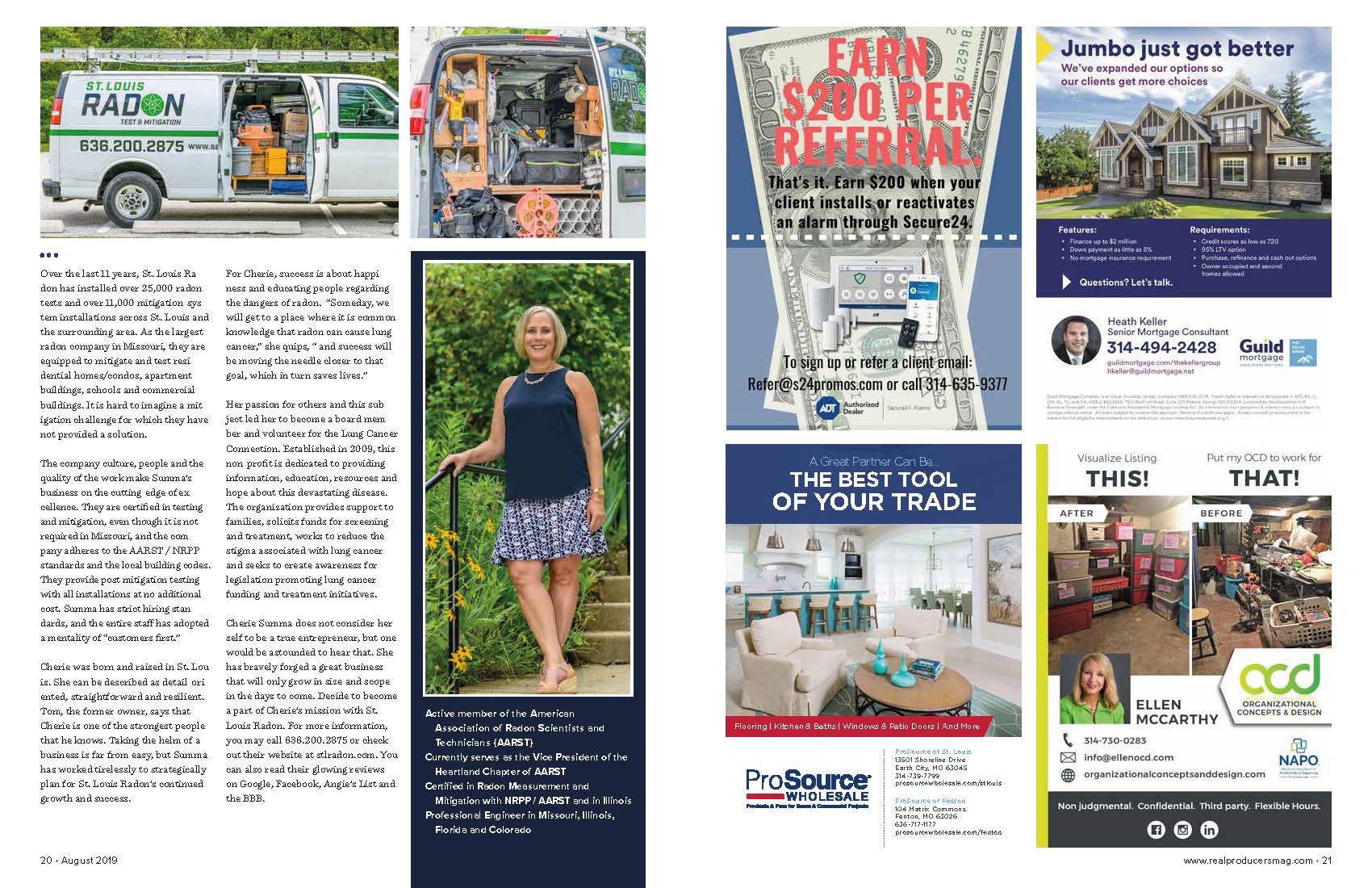 Many people have multiple goals and accomplishments that they desire to achieve in life. Some make lists that involve personal and professional goals. Few can harmonize their workplace and personal interests into one mission. Cherie Summa has done just that, and she is on her second career! “My mission is to raise awareness in the community, and educate schools, administrators, legislators and homeowners about the dangers of radon,” she proudly admits.

Cherie graduated from the Missouri University of Science and Technology with a degree in Geological Engineering. She moved to Colorado and became a civil engineer, designing subdivisions. Later, Summa had the opportunity to work in project and construction management of large residential home developments as well as the quality control and management of heavy construction projects like interstate highways. Her experience and knowledge make her uniquely qualified to work alongside REALTORS® and other partners on real estate projects.
After working for two decades as a civil engineer, Summa decided that she “wanted to be in control of her own destiny,” so she investigated other career options. In 2015, Tom Getchman sold her the company which he founded (St. Louis Radon) and managed for almost 7 years (now called St. Louis Radon Test and Mitigation). He continued working with Cherie to provide a seamless transition. A lot of people do not know what radon is and only test for it during a real estate transaction, which means many are at risk of developing radon induced lung cancer,” she explains.

Before she purchased St. Louis Radon, she gave serious thought to her legacy and to how she could best serve her community. The fact that radon is a public health issue and a subject that few understand only fueled her desire and enabled the business to have a significant impact. The company is committed to serving agents and their clients along with health-conscious families so that they can confidently promote the safety of families and their homes.
Over the last 11 years, St. Louis Radon has installed over 25,000 radon tests and over 11,000 mitigation-system installations across St. Louis and the surrounding area. As the largest radon company in Missouri, they are equipped to mitigate and test residential homes/condos, apartment buildings, schools and commercial buildings. It is hard to imagine a mitigation challenge for which they have not provided a solution.

The company culture, people and the quality of the work make Summa’s business on the cutting-edge of excellence. They are certified in testing and mitigation, even though it is not required in Missouri, and the company adheres to the AARST / NRPP standards and the local building codes. They provide post mitigation testing with all installations at no additional cost. Summa has strict hiring standards, and the entire staff has adopted a mentality of “customers first.”
Cherie was born and raised in St. Louis. She can be described as detail-oriented, straightforward and resilient. Tom, the former owner, says that Cherie is one of the strongest people that he knows. Taking the helm of a business is far from easy, but Summa has worked tirelessly to strategically plan for St. Louis Radon’s continued growth and success.

For Cherie, success is about happiness and educating people regarding the dangers of radon. “Someday, we will get to a place where it is common knowledge that radon can cause lung cancer,” she quips, “ and success will be moving the needle closer to that goal, which in turn saves lives.”

Her passion for others and this subject led her to become a board member and volunteer for the Lung Cancer Connection. Established in 2009, this non-profit is dedicated to providing information, education, resources and hope about this devastating disease. The organization provides support to families, solicits funds for screening and treatment, works to reduce the stigma associated with lung cancer and seeks to create awareness for legislation promoting lung cancer funding and treatment initiatives.

Cherie Summa does not consider herself to be a true entrepreneur, but one would be astounded to hear that. She has bravely forged a great business that will only grow in size and scope in the days to come. Decide to become a part of Cherie’s mission with St. Louis Radon. For more information, you may call 636.200.2875 or check out their website at stlradon.com. You can also read their glowing reviews on Google, Facebook, Angie’s List and the BBB.

• Active member of the American Association of Radon Scientists and Technicians (AARST)
• Currently serves as the Vice President of the Heartland Chapter of AARST
• Certified in Radon Measurement and Mitigation with NRPP / AARST and in Illinois
• Professional Engineer in Missouri, Illinois, Florida and Colorado