As people practice social distancing and self-isolation, home safety has become even more important.
Cherie Summa, chief executive officer of St. Louis Radon Test and Mitigation, 8661 Grant Rd., considers it her responsibility to educate homeowners of a silent killer potentially lurking in their house.
It is radon gas — and the second leading cause of lung cancer. Summa said that one in four homes in Missouri has high radon levels.
National Public Heath Week is April 6-12, and April is National Cancer Control (prevention) Month.
“Radon-induced lung cancer is preventable, Summa said. “Given the recent emphasis on the importance of lung health, it is a great time to raise awareness about the dangers of radon.
“When you breathe in radon, it gets into the lining of your lungs and gives off radiation,” she said. “Over time, that can damage the cells and lead to lung cancer.
“The EPA suggests that indoor air quality is five times worse than outdoor air quality and now we are spending even more time indoors,” she said.
“Most radon mitigation systems in Missouri are installed in homes that had initial readings between four to 10 picocuries per liter,” she said. “That is the equivalent of smoking eight cigarettes.”
Summa, who was born and raised in Mehlville, Missouri, graduated from the University of Missouri-Rolla with a bachelor’s degree in geological engineering and a master’s degree in engineering management.
After graduating, she started designing residential subdivisions.
“I’ve always practiced civil engineering, and worked in construction management,” she said.
She worked at McBride Homes as a land developer, and at Fred Weber Construction Co. as a project manager.
“Then, I decided I wanted to be master of my own destiny,” she said. “I had a friend who knew the previous owner of this company and he wanted to sell. I was looking for an opportunity to use my degree and do something that would better serve people and the community.”
She knew about radon in college from her geology and science classes.
She said most people become educated about radon when they buy a house and do the home inspection, which includes a radon test.
“If the radon levels come back elevated, they know they know that they will have to install a radon mitigation system, and since it’s a health threat, they usually ask the buyer to mitigate,” she said. “Real estate transactions are 70 percent of our business.”
She explained that radon comes from the breakdown of uranium which is in the soil and rocks. In the United States, one in 15 homes have radon gas.
“It’s all over the world, but some areas have a bigger radon problem than others,” she said. “Typically, the southern states don’t have as much as the northern and Midwest states because of their geology.”
Radon mitigation involves drilling a hole in the basement floor, excavating material from under the slab to create air flow, and inserting a three or four-inch PVC pipe which then goes directly outside or through the garage to the roof.
An inline fan on the piping system creates a vacuum and pulls the gas from underneath the slab so it never gets in the house.
Small Business Monthly selected Summa as One of the Top 100 St. Louisans to know to Succeed in Business for 2020.
Summa considers educating the public about the dangers of radon gas as part of her job. Summa’s company tests and mitigates any size structure.
“The state of Missouri had a grant and tested most all the schools about three years ago,” she said. “I began wondering why I hadn’t gotten even one call about doing radon mitigation since we have large building certifications and I knew that we would get most of the calls or at least one.
“I finally called the Department of Health and Senior Services about a year or so ago, and asked what had happened with the testing, and was told that they did the testing but decided against mitigating,” Summa said.
“I was told the only way to know the testing results is if your child goes to school, and you can ask the superintendent what the results are,” she said.
Summa encourages parents to speak to the owner of their child’s school or day care and ask about the results of radon testing.
“Education takes a while,” she said.
With the coronavirus on everyone’s mind, being aware of radon and its potential effects is timely.
“Everyone knows how important lung health is, and if your lungs are compromised, you’re more likely to have complications with not only the coronavirus, but any virus,” Summa said.
For more information, call 636-200-2875 or visit www.stlradon.com. 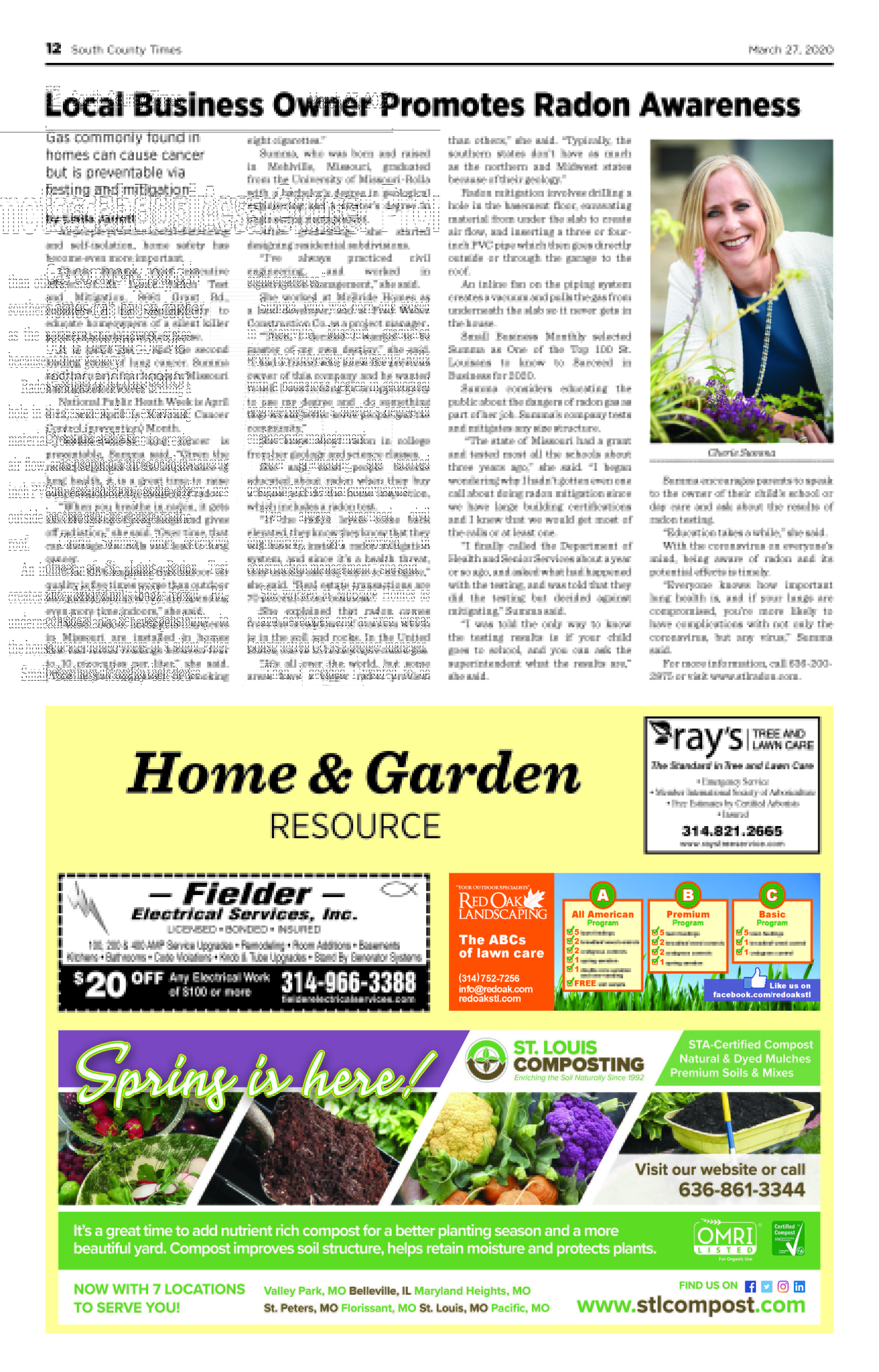